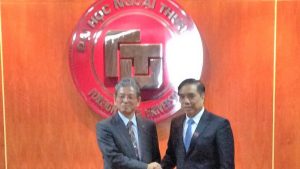 This cooperation office was established as part of Tohoku University’s participation in the Top Global University (conducted by MEXT), and their overall global strategy. The office will work closely with FTU to oversee recruitment of international students and plan educational exchanges that will help Tohoku University in achieving its goals in internationalizing the university and cultivating global human resources.

Approximately 50 individuals ranging from FTU officials, representatives from the Vietnam-Japan Human Resources Cooperation Center and Japanese corporations in Vietnam, as well as FTU students who have previously participated in Tohoku University’s exchange programs attended to celebrate the office opening.

* Foreign Trade University is a top-level Vietnamese university focused on study in the fields of Economics, Business Management and Foreign Languages. It continues to be a powerhouse of cultivating human resources that are active in the Economics world, creating Vietnamese leaders in a variety of fields. Through financial support from JICA, the Vietnam-Japan Human Resources Cooperation Center was opened on their campus, with the goal of cooperating with Japanese corporations in the cultivation of business specialists. On August 25th, 2015, FTU concluded an academic exchange agreement with Tohoku University. 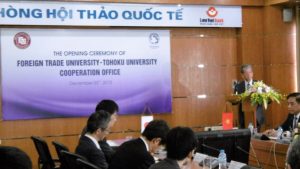 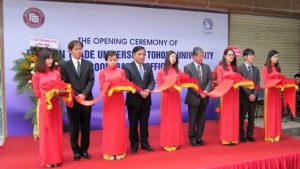