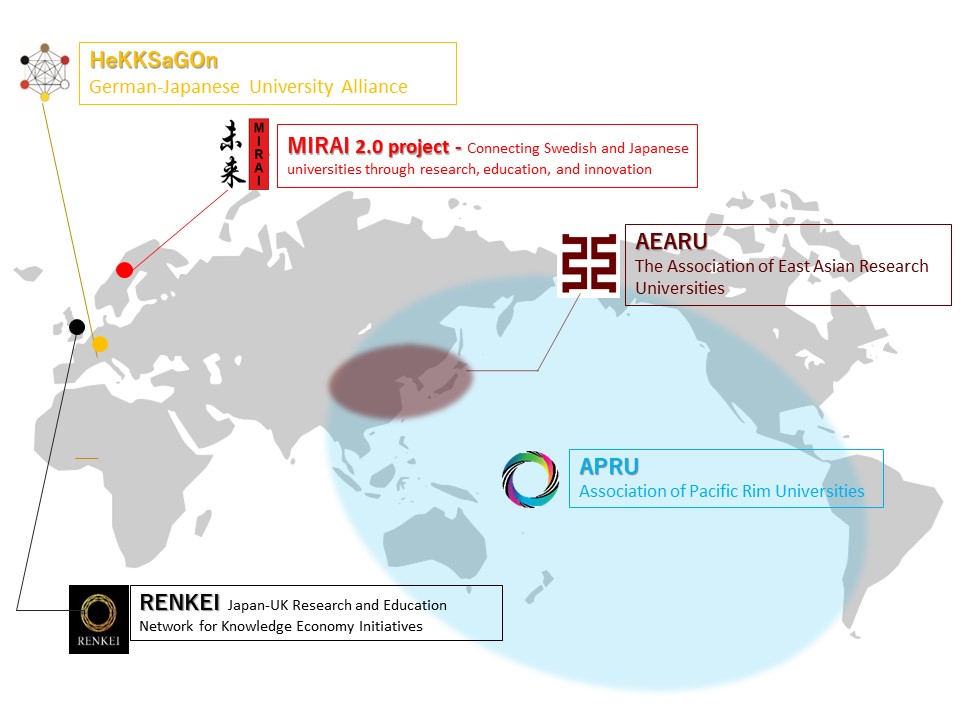 APRU was established in 1997 with the aim of fostering cooperation in education and research contributing to the economic, scientific and cultural advancement, and has grown rapidly to become a reputable international organization of leading research universities in the Pacific Rim. It organizes student-centric, research-centric and human capital development activities, and holds annual meetings for presidents and senior staff of the member universities to discuss and plan its future activities. It is now composed of 60 universities; Tohoku University joined it in 2008.
Starting April 2013, Tohoku University functions as a regional program hub for APRU’s Multi-Hazards Program in the next three years. Through training programs, summer schools, workshops and other activities provided within its framework, we will take a leading role in proposing countermeasures against low frequency high-impact disasters, making further contributions.

AEARU was established in 1996 with the aim of forming a forum for the presidents of leading research universities and carrying out mutual exchanges between the major universities in East Asia. Expectations are that this regional consortium, on the basis of common academic cultural backgrounds among member universities, will contribute not only to the development of higher education and research but also to the opening up of a new era leading to cultural economic and social progress in the region. It organizes workshops, student summer camps, student sports competitions and international symposia, promoting mutual exchanges of ideas and information and developing close bonds between the member universities. It is now composed of 19 universities from the Chinese Mainland, Japan, Korea, Hong Kong, and Taiwan; Tohoku University joined it in 1998.

MIRAI – Connecting Swedish and Japanese universities through research, education and innovation is a three-year project addressing scientific issues within Ageing, Materials Science and Sustainability, relevant to both countries. From 2020 the MIRAI collaboration has entered a new phase, called MIRAI 2.0. Tohoku University has participated since 2020.

RENKEI, the Japan-UK Research and Education Network for Knowledge Economy Initiatives, is a bilateral consortium that was formed in 2012 by leading universities from Japan and the UK under the support of the British Council. Its aim is to encourage knowledge transfer and research collaboration not only between the two countries but also between the higher education and industry sector. The participating universities in RENKEI are forming pilot projects for collaboration in three main areas: technology and knowledge exchange with industry, student mobility, and universities’ social engagement. RENKEI is now composed of 12 universities from Japan (6) and the UK (6).