On April 19, British Ambassador Julia Longbottom visited Tohoku University. Her visit consisted of a meeting with President Ohno and tours of the Tohoku Medical Megabank Organization’s facilities and of the Advanced Institute for Materials Science (AIMR).

Ambassador Longbottom described the nature of the relationship between Japan and the UK as being “friendly competition”, and she said that the UK’s leading partner in science was Japan and that the UK is eager to continue collaborating in a wide range of fields.

President Ohno introduced the university’s recent focus on data science and green economy initiatives. With respect to data science, the president explained that the next-generation synchrotron radiation facility scheduled to begin operating next year will present a range of possibilities, and in terms of the green economy, he emphasized the importance of enabling society to benefit from the results derived from the Green Goals Initiative established last year. Ambassador Longbottom expressed her expectations for greater collaboration between Tohoku University and the United Kingdom in these areas.

At AIMR, its Deputy Director, Prof. Hiroshi Suito, and the Director of the Research Support Division, Prof. Nobuyuki Nishiyama, introduced the development of the institute since its founding and the nature of its international collaborations. Ambassador Longbottom and her party were interested in AIMR’s connections with government, industry, and students, and Prof. Nishiyama explained that the institute works with major companies to provide internships to students from Japan and abroad. The ambassador’s visit concluded with a tour of AIMR’s laboratories and its common equipment room. 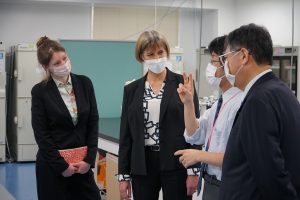 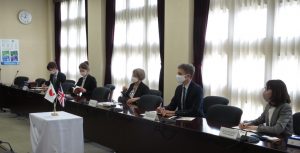 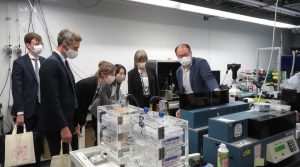