After his discussions with EVP Ueki, Mr. Maleval toured the Tohoku University Archives, and also offered a toast at the farewell dinner of the「ELyT School 2014 in Sendai」held between August 31st and September 9th by Tohoku University’s Institute of Fluid Science. 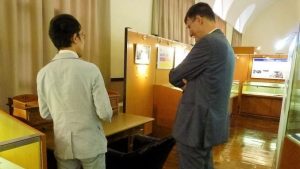