Following the signing ceremony, Professor Nagao Kobayashi (Chemistry) of the Graduate School of Science and Associate Professor Kensake Soejima (Japanese Education) of the Institute for Excellence in Higher Education introduced several initiatives. They were also shown a presentation introducing Saint Petersburg State University and its recent research. Afterwards they took part in a lively exchange of opinions.

Saint Petersburg State University was founded together with the Imperial Academy of Sciences (currently the Russian Academy of Sciences) in 1724, and boasts the title as Russia’s oldest university. In 1819 the institutions separated and became independent of each other. It has 21 faculties (including chemistry and Russian language classes for foreigners), and prides itself with having 8 Nobel laurites, as well as several Russian presidents and Prime Ministers amongst its graduates. With its many distinguished professors and scholars, it plays an extremely important role in Russia academic and cultural identity.

It is hoped that this agreement will lead to further student and research exchange between both institutions. 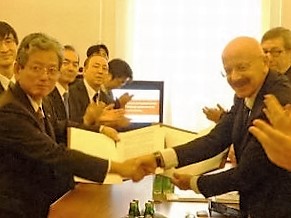 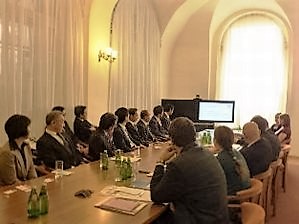