On October 14th, 2014, Tohoku University’s Office of Japan-Russia Relations hosted a lecture on the state of Russian science and technology given by Yukihide Hayashi Principal Fellow and Yuko Tsuda Fellow of The Center for Research and Development Strategy, Japan Science and Technology Agency (JST-CRDS).

The topics of the lecture included examples of Russia’s strong and weak points in science and technology were presented, as well as a look at recent research, education and industry-academic collaboration, as well as scientific research in the Russian Far East. The lecturers provided clear examples which attracted the attention of the 60 faculty and students who gathered. 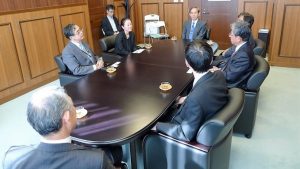