Despite being a Sunday morning, over 20 representatives from around China came to Beijing for the meeting, including the former president of Tsinghua University Gu Binglin (Honorary Chairperson of the Chinese Alumni Association Management Committee), and shared nostalgic memories of their time in Sendai and attending Tohoku University. 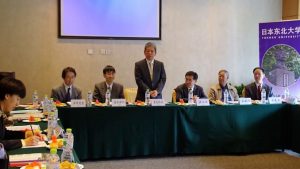