Université de Lyon was founded in 2007 as a unifying structure of 11 higher education institutions, including the national Institute of Applied Sciences of Lyon (INSA-Lyon) and Central Lyon (ECL), as well as the French National Centre for Scientific Research (CNRS). In September, 2013, Tohoku University concluded an academic exchange agreement with Université de Lyon.

The first day of the meeting took place in Tour Oxygène, which gave the participants a fabulous birds-eye view of Lyon. Université de Lyon President Khaled BOUABDALLAH gave an explanatory lecture of the aim of the alliance, while Director-General of the economic and international development department Métropole de Lyon Jacques DE CHILLY and Director of the ONLY LYON, Lionel FLASSEUR gave a presentation of the metropolitan environment and its assets.

The next day, at Lumière University Lyon 2 and Université Jean Moulin Lyon III, each member university held an individual signing ceremony with Université de Lyon, as well as a roundtable discussion on the topics of “Biosciences, Health and Society” and “Sciences and engineering for a sustainable society”. Members also attended a lecture from CNRS regarding the connections and support systems for research institutes in France and overseas.

At Tohoku University’s signing ceremony, the memorandum of understanding for the liaison office at INSA-Lyon was also renewed with Université de Lyon. Additionally, at the roundtable discussion, EVP Ueki introduced the Tohoku Medical Megabank Organization, and exchanged opinions with the other members regarding the potential for cooperation with relevant departments. Prof. Jean-Yves CAVAILLE of INSA-Lyon also explained that through using support from CNRS, Tohoku University, INSA-Lyon and ECL would be able to create an international cooperative research unit (Elyt-Max). After summarizing the progress of this first meeting, the overall direction of this alliance was decided, and the members committed to practical exchanges in the future. 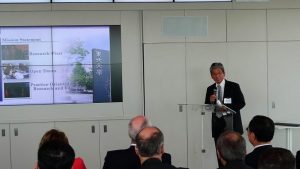 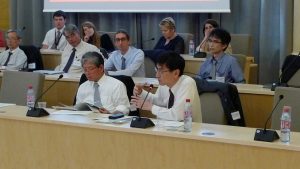 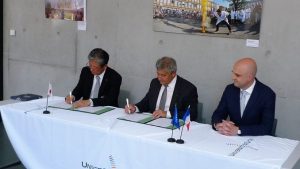 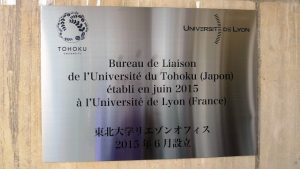