EVP Ueki gave an overview of the current status of the university’s collaborative efforts with universities in America, as well as several countries in the Asian region. Further, he discussed the university’s plans for future global development. Mr. Beasly and EVP Ueki also expressed their mutual desire to encourage further exchanges between Tohoku University and the U.S.A.

As Mr. Beasly is familiar with China as he formerly served as Vice Consul in Shanghai, China, the party took a tour of the Lecture Hall where Lu Xun Studied, following their meeting. 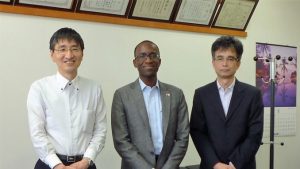