As part of this project, the Far Eastern Federal University School of Engineering chose five of their students to take part in the Tohoku University Cross-Cultural Program with Russia (TUCPR), organized by Office of Japan-Russia Relations at Tohoku University and the Institute Fluid Science International Exchange Promotion Office.

Under the Russian government’s mega-grant project, Tohoku University professor Kaoru Maruta (Institute of Fluid Science) was chosen to be a project leader of a joint laboratory at Far Eastern Federal University. While there, he carried out joint research and student exchange in the field of Energy Engineeering (combustion), one of the priority fields of the Re-inventing Japan Project.

The program ran for eight days from September 2nd-9th, 2015, with the Russian students taking part in Japanese language and culture classes. The students also enjoyed field trips to Matsushima, Akiu, the university library and museum, as well as their tour of Sendai Thermal Power Station. These courses and excursions helped deepen the student’s understanding of Japan.

Additionally, following Professor Maruta’s plan and with the cooperation of the Division of Mechanical Engineering and the Institute of Fluid Science, the students were able to tour many different laboratories, attended lectures, and learned about the cutting-edge research being carried out by Tohoku University.

Further, during the program’s field trips, students from Tohoku University accompanied the students, engaged in discussion about the difference between electricity generation in Russia and Japan, and created an open, cooperative environment.

This program provided not just a valuable educational opportunity, but the chance for Japanese and Russian students to share their views and opinions, understand each other, and deepen friendship between the two nations. 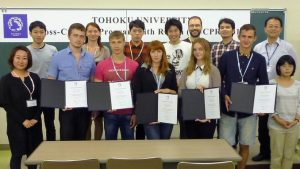