Since the conclusion of an academic exchange agreement, the two universities have been actively carrying out exchanges. Further, in October of last year, UGA Vice President Jérôme Gensel paid a courtesy visit to TU Executive Vice President Toshiya Ueki, and toured the TOKYO ELECTRON House of Creativity.

During the meeting, which was also attended by TU Graduate School of Arts and Letters Associate Professor Taku Kuroiwa, they discussed the currently proceeding joint projects between their respective Arts and Letters faculties, offering a variety of support for the academic exchanges, the facility at UGA that resembles the TOKYO ELECTRON House of Creativity and a variety of other topics. Following this meeting, Professor Doudet received a tour of the TOKYO ELECTRON House of Creativity led by Tohoku Forum for Creativity Program Coordinator Liam Baird.

After the meeting, AEVP Yamaguchi stated, “I was able to see the French universities’ enthusiasm for making Humanities and Social Sciences involved in Innovation Creation”, and expressed hopes for future, additional exchanges between the two universities. 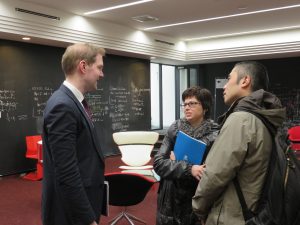