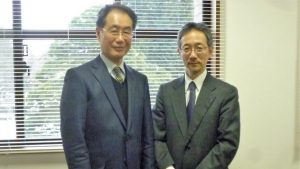 During his visit, Consul-General Ikeda gave an introduction of Paraná and Santa Catarina, Brazilian states which he has jurisdiction over. In addition, he inquired about the possibility of future exchanges between Brazilian and Japanese universities.

Santa Catarina and Sendai’s ties began in 1803, with four crewmen of the Wakamiya-maru (a ship launched by the Sendai clan from Ishinomaki Port) made landfall in Santa Catarina while returning to Japan as castaways. Last year, in the state’s capital, Florianópolis, the Association Miyagi Kenjinkai of Brazil cooperated in holding a Tanabata festival. In recent years, relations between Santa Catarina and Miyagi have been deepening.