During this meeting, President Satomi received an introduction to the Japan Academic Northern Europe Network (JANET), a network among Japanese Universities and research institutions which have offices for research and student exchange in Germany and its neighboring countries under the leadership of JSPS Bonn Office and Tsukuba University. President Satomi introduced the university’s Re-Inventing Japan Project (Russia) and activities regarding being an organizer for the Japanese-Russian Forum of Rectors, and exchanged opinions on promoting young researcher exchange between Japan and Russia as JSPS Bonn Office takes a role in overseeing in Russia as well.

Professor Kodaira also visited the Graduate School of Science, where they listened to an explanation of Tohoku University’s Japanese-German Graduate Externship Program that was adopted in FY2016.

This explanation was provided by Professor Tadahiro Hayasaka, Dean, Graduate School of Science and Faculty of Science, Associate Executive Vice President Masahiro Yamaguchi, Professor Michihiko Nakamura (Program Coordinator), and Professor Minoru Ueda, and was followed by discussions on the future direction of the program. 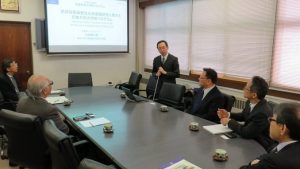