Based in Sendai, the new laboratory is known as “Engineering Science Lyon-Tohoku for Materials and Systems under Extreme Conditions,” or ELyTMaX. Fifteen members, half of them French, study the behavior of materials and systems, to better understand their reaction to complex stress, electromagnetic fields, and deterioration over time.

“Our long-term aim is to be able to predict the lifespan of structures, and to optimize the use of natural resources and energy in a way that is also safe,” says Professor Jean-Yves Cavaille of INSA-Lyon, who is co-director of ELyTMaX. “The idea is to try to develop materials by design, which can be used longer and safer, even in high stress situations and unfriendly environments.”

In practical terms, this could mean safer industrial plants or more efficient transportation systems. “For instance, the use of stronger corrosion-resistant materials deposited by cold spray methods could reduce deterioration in materials, making them stronger and longer lasting. In addition, techniques for monitoring the health of structural materials may extend their lifetime all along their service time,” says Cavaille.

In biomedical applications, the research could also contribute to the development of better prostheses or bone substitutes.

At the inauguration ceremony, Tohoku University President Susumu Satomi described the establishment of ELyTMaX as the culmination of decades of successful partnership between the institutions. “I have great expectations that ELyTMaX will be used as a place where researchers from Tohoku, Lyon and CNRS can gather their common goals and use their specialty fields to a new, higher level.”

Mr Collomb too, stressed the importance of strong cooperation in the pursuit of innovation. “Through ELyTMaX and the collaboration between university partners, we can open wide the door to the future.” 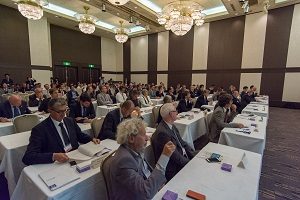 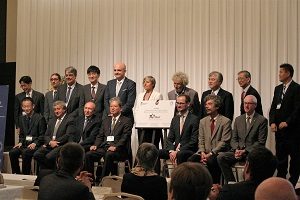 The group did a tour of Tohoku University, starting with the laboratory of Professor Kazuhiro Ogawa, who is co-director of ELyTMaX, alongside Cavaille. While at Aobayama Campus, the group also visited the International Research Institute for Disaster Science (IRIDES) and met with Director Fumihiko Imamura.

At Katahira Campus, they spent time at the TOKYO ELECTRON House of Creativity, and ended the day at the Institute of Fluid Science (IFS) and the Materials Solutions Center (MaSC) where ELyTMaX has its laboratory.

Tohoku University has been collaborating with research teams in Lyon for 30 years. Liaison offices between the two institutions were set up in 2004, with both sides enjoying numerous exchanges and academic agreements over the years.

With ELyTMaX now officially off the ground in Sendai, there are hopes that a mirror site laboratory – featuring expanded, complementary research – can be set up in Lyon next year.