Founded in 1946, the university is located in Charlotte, a city known as a hub of America’s energy industry, and as such has a rich history of research in this field, as well as active industry-academia collaborations.

During their meeting, Associate Executive Vice President (for International Affairs) Masahiro Yamaguchi, Professor Kazuko Suematsu (Institute for Excellence in Higher Education), and Senior Assistant Professor Ryan Spring (Institute for Excellence in Higher Education) were also in attendance, where they exchanged opinions on the future direction of exchanges between the two universities.

During the visit the group also visited the Department of Engineering at the Global Learning Center. 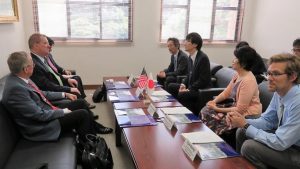